The Tonga island arc-deep sea trench system is the most linear, fastest converging, and seismically active of any of the world's subduction zones. At ~26o S, the trench is intersected by the Louisville Ridge, a 4500 km long chain of seamounts that increase progressively in age away from a hotspot, presently located near the intersection of the Eltanin Fracture Zone with the East Pacific Rise. Previous studies show that there is a gap in shallow seismicity in the Tonga-Kermadec forearc near its intersection with the Louisville Ridge suggesting that seamounts at the leading edge of the ridge maybe acting as a barrier to seismicity. During February this year we acquired new marine geophysical data (swath bathymetry, gravity, magnetic and seismic refraction data) onboard M/V SONNE which have shed new light on the structure and morphology of the leading edges of the underthrusting and overthrusting plates in the region of the intersection. The purpose of this project, which is a collaborative one with Dr. Ingo Grevemeyer at IFM-GEOMAR (Kiel, Germany), is to use the new data to determine oceanic crustal age, the structure of the forearc and Louisville ridge, and the long-term flexural strength of the subducting Pacific oceanic plate. The student will be involved in all aspects of the proposed work and will receive training in the manipulation of large marine geophysical data sets and, gravity, magnetic and flexure modeling. 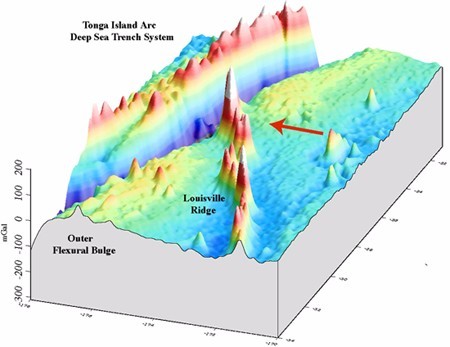 Das, S. and A. B. Watts (Submitted to Proceedings of SUBCO Conference, Springer), Effect of the subducting seafloor topography on the rupture characteristics of great subduction zone earthquakes.