Tectonics, flexure and uplift of the Sierra Nevada, California

The 600 km long Sierra Nevada is one of the most impressive mountain ranges in North America. The mountains reach elevations of up to 4 km in their central part, rise upwards of 2-3 km above adjacent valley floors, and their peak heights increase systematically from west to east. Geological data indicate that the mountains were uplifted during two main periods in the Late Cretaceous and Late Cenozoic. Previous work has attributed the early phase of uplift to crustal thickening due to granite batholith emplacement and the later phase to flexure due to an upward acting deep crustal root load. These models do not take into account, however, the contribution to the uplift of erosional unloading associated with river incision or mechanical unloading associated with the frontal normal (and dextral strike-slip) fault system that separates the Sierra Nevada to the east from the Basin and Range province to the west. The aim of this project is to use the available geological and geophysical data to determine the causes of the uplift. The project, which is a collaborative one with Prof. Driscoll at the University of California at San Diego, will involve the compilation of existing geological and geophysical data sets, the analysis of high-resolution topographic data sets using ERmapper and other landscape DEM software (e.g. ArcView), gravity and flexure modeling using both continuous and dis-continuous (i.e. broken) elastic and viscoelastic plates, and, if sufficient funds can be raised, the possibility of field work in the Owens Valley region. 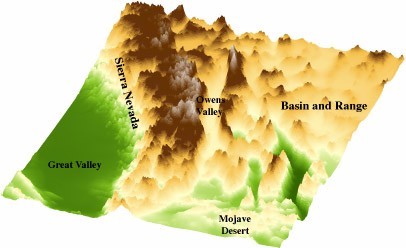