The deep seismic structure of the Cape Verde hotspot swell

There is currently much controversy about the origin of oceanic volcanoes such as the Cape Verde islands that are located in the interior of oceanic plates, far from plate boundaries. This so-called hotspot is historically active and is associated with one of the worlds largest topographic swells. Some believe that hotspots are caused by mantle plumes that rise from deep in the mantle to interact with the base of the plates. Others suggest that it is the stress state of the plates themselves that cause hotspots. In order to address these questions, we undertook last summer a seismic refraction survey of the Cape Verde islands region using a mix of passive and active techniques in collaboration with Dr Christine Peirce from Durham University and Dr Ingo Grevemeyer from IFM-GEOMAR in Kiel, Germany aboard the R/V Meteor. The seismic data acquired during the cruise was recorded by 40 ocean bottom seismographs (OBSs) deployed at ~10 km spacing along a 500 km long N-S transect through the islands (thick black line in figure below). The overall aim of this project will be use a sub-set of this data to determine the thickness and structure of the crust beneath the islands and, hence, the origin of the swell. Unusually thick or thin crust, for example, would suggest that the swell is a relatively old feature that formed at a plume-influenced mid-ocean ridge. Normal thickness crust, however, would suggest it is a relatively young feature that formed in response to vertical motions in the underlying mantle. The project will involve background reading on the current plume debate, the analysis of marine seismic refraction data, and gravity, geoid, and flexure modelling of oceanic crustal structure. 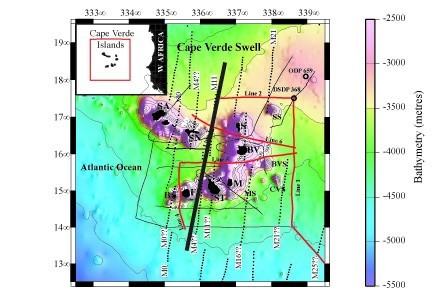